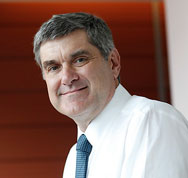 The Thompson laboratory has proposed that the basis of metazoan cell survival is determined by the inability of cells to take up nutrients in a cell-autonomous fashion. This hypothesis was formulated to explain how multicellularity might have arisen during evolution. We believe the lack of a cell-intrinsic mechanism to regulate nutrient uptake provides the first and most fundamental barrier to cell transformation.

Based on our model, we have begun to define the molecular signaling pathways that regulate nutrient uptake. Mammalian cells fuel their growth and proliferation through the catabolism of two main substrates: glucose and glutamine. Most of the remaining metabolites taken up by proliferating cells are not catabolized but instead are utilized as building blocks during anabolic macromolecular synthesis. Non-transformed cells depend on growth factor signaling to direct glucose and glutamine uptake. These observations led us to hypothesize that there might be specific oncogenic transformation events that directly regulate the uptake and metabolism of glucose and/or glutamine. Investigations of PI3K and its downstream effects on Akt have confirmed that these oncogenes play a direct role in stimulating cellular glucose uptake and in directing the metabolic conversion to aerobic glycolysis. In contrast, the genetic determinants of glutamine uptake and metabolism during cell growth have not been determined. We have demonstrated that in human and mouse cancer cell lines, activated Akt directs a direct conversion of metabolic control to aerobic glycolysis (the Warburg effect). This conversion addicts cells to glucose and renders them sensitive to any agent that inhibits glucose uptake or glucose catabolism. Cell lines exhibiting aerobic glycolysis are glucose-dependent because the PI3K/Akt/TOR pathway directs other metabolic substrates into lipid and protein synthesis. Interestingly, the ability of Akt to direct cells to undertake aerobic glycolysis is under cell-autonomous regulation by the tumor suppressor HIF-α. As predicted by our collaborator, Celeste Simon, this HIF-dependent regulation is regulated by mitochondrial ROS and is independent of O2-dependent regulation by proline hydroxylases.

Based on our published work suggesting that cellular glucose uptake is directed by extracellular ligand-initiated signal transduction, we have begun to examine the role of evolutionarily conserved nutrient-sensing pathways in the regulation of cell growth and survival. These studies were undertaken by examining the response of cells when signaling or nutrient availability drops below levels needed to support cell growth. Two areas in which we have made considerable progress are in the regulation of cell proliferation by AMPK and the regulation of cell motility and survival by the TOR substrate α4. Most exciting, we have discovered that the ability of AMPK to promote the survival of bioenergetically stressed cells is dependent on p53. Furthermore, activating AMPK in p53-null cells induces cell death. These data suggest a potential use for metformin and its more potent analogue phenformin as cancer prevention agents.

Recently, we have uncovered a novel role for glutamine catabolism in cell proliferation. Glutamine is an essential amino acid for growing cells and is critical for producing sufficient NADPH to support fatty acid and nucleotide biosynthesis. In addition, we now have evidence that the oncogene Myc stimulates glutamine metabolism. Furthermore, Myc-transformation addicts cells to glutamine. Exploiting this observation is under active investigation. This work underlies our successful Stand Up To Cancer (SU2C) application to investigate the role of glutamine metabolism in pancreatic cancer and develop new diagnostic and therapeutic approaches to such tumors.

In the last year we have begun to explore whether cellular metabolism influences nuclear events. One potential area of control would be at the level of histone modification. Histone acetylation has been implicated in influencing chromatin structure and transcription. In the past year we have provided a demonstration that the production of acetyl-CoA by ATP citrate lyase links glucose metabolism to histone modification and gene expression. We now have evidence that glutamine metabolism is a critical regulator of both DNA and protein methylation. Inhibition of demethylation appears to play a major role in blocking cellular differentiation during cell transformation.

Based on studying how a cell meets its synthetic and bioenergetic requirements of cell proliferation, we now have developed an active program studying the bioenergetics of cell proliferation. Growing cells require high quantities of NADPH, acetyl CoA, S-adenosyl methionine, and pentenyl pyrophosphate, all of which are direct byproducts of mitochondrial bioenergetics and can be produced only when pyruvate is in excess of that needed to produce sufficient NADH to maintain ATP production. This work has suggested that drugs that inhibit the production of these precursor molecules may play an important role as anti-neoplastic agents. Recently we have begun to define how cytosolic acetyl-CoA is generated and whether inhibitors of its production might have an anti-neoplastic role. We believe these studies represent a potentially important validation of our approach to understanding cell growth and proliferation through studying bioenergetics. Recently as well we have collaborated on the development of an NMR-based bioreactor to carry out cell-based metabolic studies using C-13-based metabolites.